I splurged on a new headshot recently and was lucky to find Carla Coria, a photographer here in Brooklyn, New York who does amazing work with a simple studio and a digital camera. She made prep easy and effective, the shoot as fast and painless as possible, and a week later had a final shot plus 200 others all ready on a DVD. And if she made me look decent, you know she’s got skills.

Because nothing whips rich people into a frenzy quite like telling them they canâ€™t have something.

If the huge oil profits caused PR and political problems for energy companies recently, it’s only logical that taking the reverse action could have the reverse effect, which is what Citgo (U.S. arm of Venezuelan oil) did, and is getting big media attention here this morning…

Venezuelan President Hugo Chavez added New York City to his program of selling discounted heating oil to low-income Americans, begun in Boston last month… “We want to help the poorest communities in the U.S.,” Chavez said in August. “There are people who die from the cold in winter in the U.S.”

Skeptics interpret this as a way of embarrasing President Bush, but ultimately it’s a great humanitarian gesture that should shame other companies into doing the same.

The Guidant Corporation said yesterday that it was recalling about 29,000 implanted heart devices because of flaws that might cause them to short-circuit when they are supposed to deliver a potentially life-saving shock.

What makes the product flaw so important in this case is that the defibrillators are located inside the users’ chests. If quality control alone wasn’t bad enough,

The recall, which comes at the urging of the Food and Drug Administration, involves three models of defibrillators made by Guidant. In the case of one model, the Ventak Prizm 2 DR Model 1861, Guidant did not tell doctors for more than three years that it was prone to electrical failure because of a design flaw. The company also disclosed yesterday for the first time that two other Guidant units had also repeatedly short-circuited.

So not only is the device rather difficult to “recall”, it happened only when the government stepped in, has been an undisclosed problem for years, and incidentally there’s a couple more products that are now revealed as flawed. I guess that last disclosure signals they are owning up to the problem, but one wonders if they’re doing enough to fix the problem.

The company said it was aware of two recent deaths involving the units at issue. It is not clear how much the recalls may cost Guidant.

I’d bet Guidant has a pretty good idea of how much it will cost, that cost is the reason for their delay in disclosing the problem, and accounts for their passive position on the issue…

While the action is technically a recall, it will be up to patients and their doctors to decide whether to undergo surgery to replace the affected devices. Such decisions are typically based on the age and health of a patient and the physician’s assessment of a device’s risk.

The physician’s assessment of the device’s risk? Wouldn’t physicians want to avoid the risk of recommending the use of a flawed product (and be paid to replace it)? Hasn’t Guidant learned from the Tylenol crisis how to save a brand even when your product has led to accidental deaths? Do they perceive this as a product issue or a brand issue? Or a moral issue?

Ironically, Johnson & Johnson — makers of Tylenol — is currently in talks to buy Guidant…

“The events reported by Guidant are serious matters, and Johnson & Johnson is engaged in discussions with Guidant to help the company understand the issues,” the statement read.

So is that J&J getting help understanding the issues, or Guidant?

…some patients like Ms. Alexson and Mr. Parsons are sharing a similar emotion: a sense of betrayal that Guidant did not disclose the problem earlier so that some people might have been spared the tough choice they now face.

While Guidant has offered patients a free replacement unit, Ms. Alexson plans to get one made by a competitor, Medtronic Inc., and battle out the financial issues later. “I can’t trust these people who sit around in their offices and decide whether I’m going to live or die,” she said

My recent post about brand layering reminded me of something Kevin Fong mentioned at the ID Design Strategy conference. Companies like Polaroid and Westinghouse are now renting out their brands to other manufacturers, while the parent company puts an ironic layer of marketing frosting on top: “You can be sure… if it’s a Westinghouse.” Um, apparently we can’t. Click through to the small appliance category and the mask comes off, a giant list of “Salton Brands” (not “Salton Products” mind you).

With brand layering, brand renting, and consumers taking the situation literally into their own hands, an authentic brand backed by an authentic company will be a rare and valuable asset. My current client has two offices full of authentic people doing authentic work under an authentic-but-little-known name, they’re feeling the pressure to grow, and the pure marketing path (as opposed to marketing great work) tempts them. It’s easy to talk about doing the right thing and focusing on the customer, but the reality — even in “good” companies — is much messier, requiring thoughtful conversation within the organization of how the products and processes on the drawing board will change the way they are perceived.

Last Saturday I sauntered into Urban Outfitters to see what they were selling these days. Their inventory is pretty edgy and feels like a bellweather of what fashion is moving from the lead users to everyone else.

I was drawn to this line of relaxed suit jackets, which mix business and design in a way you might think I’d want them mixed. The line is called Urban Renewal (a house brand?) and which — according to the tags — might be vintage clothing, might be new, and/or might be modified somehow… 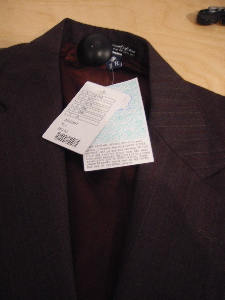 Some of the jackets had added stiching patterns or an ’80s iron-on or patch on the back. On this particular specimen, the jacket was vintage and simply rebranded, which is only appropriate as the original was created by Needle Craft for another company called Good Friends of Athens, Tennessee. Notice how Urban Renewal leaves the original label inside… 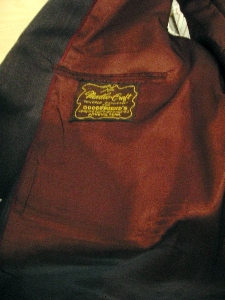 It was only $59, so I had half a mind to buy it and add my own layer of branding to it. But, now inspired, I instead headed for the vintage store where I found a mint DKNY suit jacket for $15. After spending another $10 in funky buttons at the sewing store and a half hour of sewing, I had a Noise Between Stations brand jacket. The customer-made approach was more fun, an exercise in play, and saved me $35.

Irreverent online outfitter Moosejaw Mountaineering‘s homepage currently reads: “The person who wrote this text just started at Moosejaw. He is not funny. But we’ve got softball season coming up and he’s a ringer.” NYT Magazine says,

This is not your standard outdoor-brand message, which tends to go something like this: Our stuff is strictly for the hard-core, not for the poseur (so never mind that you keep seeing our logo on people loading their S.U.V.’s in mall parking lots). Wolfe, however, says he has learned that the ”hard-core user” has no problem with Moosejaw’s approach — and not because it’s subtle or sneaky but because it’s so over the top.

They managed to keep the traditional audience and add a new audience by deviating from the usual way of doing business, in this case altering their identity. Small Dog is another example of same product, new attitude.

Hindus in Europe want to take back the swastika because to them it’s a symbol of luck and peace which the Nazis stole. Meanwhile the European Parliment is considering banning the symbol throughout Europe after Prince Harry of Great Britain wore a mock Nazi uniforn to a costume party.

Gerber makes pocket knives and tools, but not the kind of knives I’d feel comfortable pulling out in an office to adjust a screw on my laptop… these are serious knives. Their branding is a direct extension of the products, summed up in the words Fend for yourself…

When did we decide campgrounds needed laundromats? When the car stalled, whose bright idea was it to reach for a cell phone instead of a tool? …Our nation’s great accomplishments were a testament to hard work, sweat and ingenuity. After all, we not only put a man on the moon, but built him a rover to drive while he was up there.

A product named FreeStyle Flash is…? Take a guess, then look at the answer.

The concept car is a phenomena of the automobile industry. At the beginning of the auto show season, manufacturers will show prototype cars of the future, vehicles that illustrate their best ideas and excite people about the future of the company.

(Incidentally, there’s been an interesting trend, starting with the VW New Beetle, where manufacturers receive so much positive feedback to their concept cars that they immediately ready them for production. While this turns into an easy way to test new product ideas, it fails to inspire us quite the way the unfeasible-but-visionary concepts do.)

Transferring this idea to other industries is an interesting way to envision new products. Think of it as way to amplify the brand to see what happens. If a BMW concept car is even more BMW than BMW, then what is even more Nike than Nike? More Prada than Prada? More IKEA than IKEA?

The power and effectiveness of the new YWCA logo is worth reading about, in Speak Up, Design Observer, and Landor.

Jared Spool offers some interesting advice when it comes to testing an institution’s branding:

Under the direction of Walt, Disney built the brand quality that they are ‘magical’. Adults interacting going to a Disney resort see the ‘magic’ in the design of their products, both in the direct interaction with the elements of the resort and with their children’s response to the elements.

Would a child ever tell you that Disney’s main quality is ‘magic’? Would an adult for that fact? Not without a lot of coaching or pressure.

To measure whether Disney’s site is ‘magical’, we’d need to measure the second-order effects of being magical. We’d need to talk about how a ‘magical’ site manifests itself — what happens when it is magical and when is it not magical?

I can hear it now: ‘Monday we’ll meet with Monday…’

That PWC could pull a MarchFirst says to me either the management has as much taste in names as Accenture or that they’re really embracing new economy ways. Suddenly Razorfish doesn’t sound so ground-breaking anymore. We’ll have to push further out. Maybe Emmanuel, Shine, or Intestine.