In my continued quest to simplify my life and reduce expenses, I discovered the MVNOs like Ting and Consumer Cellular that lease infrastructure from the big carriers have come of age. They have straightforward pricing plans that are a fraction of the cost, better designed websites, and better customer service as reported by Consumer Reports.

Although I like Ting better as a company, our GSM-network iPhone 4s’ would have slowed down on their network. By going with Consumer Cellular I stay on the AT&T network and cut my bill in half ($45 vs $90) for two phones. That’s even $10 cheaper than Ting.

The process is easy. Order online, swap in the free SIM card they send, and give them a call to activate service. There was a bit of fidgeting to get voice mail re-setup etc. but now it’s working just as it did before, but cheaper.

And here, in a single screen, is what makes them different. I hear usage alerts are available on AT&T. I’ve read articles about them. I’ve seen links to that effect on their customer website. But I (a software designer) was never able to set them up. But here’s what they look like on Consumer Cellular: 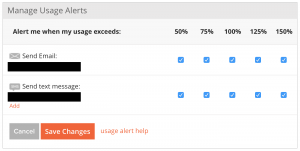 Not only is the design clear as day, they default the alerts to ALL ON. They’d rather you be in-the-know and have plenty of notice before you go over your plan so you can decide to pay-per or change your plan. Love that.

By contrast, the number AT&T displayed on their website to cancel their account was only for new accounts. And when I tried to use the online chat instead I get this: 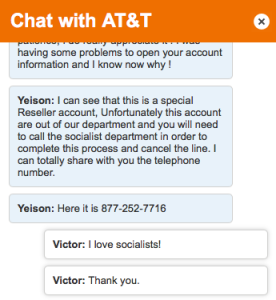 And that number is actually only for reseller agents. I’d tell you how it all turned out but I’m still on hold with them.