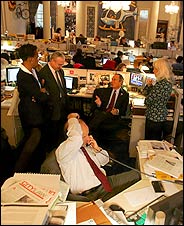 I’m a big proponent of tearing down the walls and cubicles in offices to encourage teamwork. Even Herman Miller, who introduced cubicles decades ago, is opening up the cubes and shaving down the partitions.

Wandering through the cavernous Board of Estimate chamber on the building’s second floor, Mr. Bloomberg said he would make his office there, forsaking an ornate private enclave that was the inner sanctum for previous mayors and their closest aides. The mayor-elect said he would create a huge workspace that would be just like the open-air trading room in which he worked at Salomon Brothers and later recreated at his private company, Bloomberg L.P.

He would put his desk in the middle of the room and seat his top deputies and staff members around him, he said. Dozens of other aides would sit at cubicles placed side by side, ensuring the access of lower-ranking managers to the mayor’s inner circle and bringing with it more accountability.