Zoom has been my go-to online meeting tool for years because it’s easier to use than competitors. So I was surprised recently when they screwed up so many privacy and security issues. It reminded me of some of the case studies I wrote about in my book, Why We Fail. My theory: our standards for privacy and security increased significantly in the past several years, particularly due to companies such as Apple who made it a strategic issue, and Zoom missed this shift. It looks like they’re moving swiftly to remedy the situation, but hopefully they don’t throw out the baby (usability) with the bathwater (dirty privacy practices). My video here explains more.

Way back when, I was a journalism major in college. So I was pleased to meet the folks from Daylife last year and bat around some ideas about how they’re aggregating, understanding, and syndicating news applications. I just found part of the conversation lying around my hard drive and thought you might be interested in browsing some exploratory ideas for newsware user interfaces. 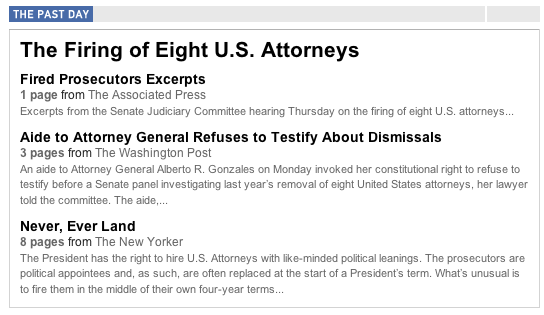 I just noticed that Worthwhile magazine dodged a trademark suit bullet and re-emerged as Motto magazine. They had good spirit before, I’m looking forward to checking out this new incarnation.

We’ve been working for several companies facing how they and their markets change with the further spread of social media. It’s creating enormous potential for more democratic media production and sophisticated tools, but a lot of it will rely on companies understanding it and being receptive to it. We’re developing a framework to help companies do this, and one of the key considerations is not scaring the shit out of them.

I’m referring here to the control issue. Some have simply said “you must give up control.” J.D. Lasica puts it more gently: â€œWeâ€™re transitioning to a new kind of culture. More participatory, more open, more interactive where the locus of control passes.â€

I agree, and yet telling business people they’re losing control isn’t likely to go down well. People like control. Managers like control. Control helps us survive in an uncertain world.

Jeff Jarvis frames it a different way: “The No. 1 lesson of the Internet whether youâ€™re Howard Dean or a media company or a marketer, is that you have to give up control to gain control.” He cites a benefit, but still we’re left asking, “How much control does one give up? What do we really stand to gain?” Business managers aren’t an audience of socialists, they’re an audience that needs to make money to keep themselves and their colleagues employed in an uncertain economy. 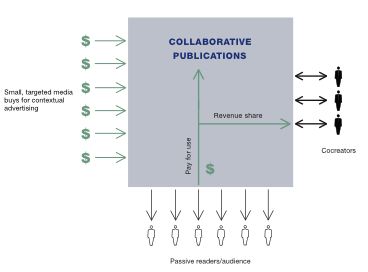 I think frames that appeal to good old fashioned business drivers will be more effective, such as:

…and so on. We outlined these in the form of a poster, Social Media and Value Creation. It’s a work in progress; we haven’t seen established companies pursue this course yet and everyone will be learning.

At Starbucks, a Blend of Coffee And Music Creates a Potent Mix: Chain Boosts Sales and Careers As It Co-Produces, Offers Selected CDs in Its Stores
Wall Street Journal, July 19, 2005

David Byrne always presents something new, something interesting, all wrapped in a consistent and genuine funky catchiness. He’s posted an mp3 of his song My Fair Lady to OurMedia, has a new album of opera-influenced songs and has been writing an online journal. From the latter, there’s introspection and honesty not common among his peers:

It’s beautifully written, though I think it should probably be filed under fiction. I always thought his persona, which early on was that of a young Woody Guthrie, was just that, a persona. … (Call me skeptical, but a Jewish guy from Minnesota talking and writing like a backwoods hick/poet, huh? What’s that about?)

On a Pixies show in NYC:

Charles had on some black eyeliner which I couldn’t see from my seat. (Michael Stipe does this too, is this something I should know about?) From the audience I thought it made him look like an Aztec or Mayan God, calmly but loudly issuing baffling cosmic pronouncements mixed with pain and rage.

On traffic in Southern California:

I wonder if people here realize that the rest of the world doesn’t live like this? I wonder if, as all this traffic just gets worse and worse year after year, if people will eventually confine themselves exclusively to their home communities â€“ people in Silverlake will NEVER go to Santa Monica and vice verse, hell, people in Santa Monica will probably eventually stop going to west LA!. The area will revert to little isolated villages. It’s already somewhat like that, but as gas doubles and quadruples in price, as it’s bound to do in the not too distant future, well, then only the wealthy will be able to suffer these hellish commutes.

An essay I wrote in 1991, Music and Censorship, will be included in an upcoming Pearson textbook, Music and Culture. Even more surprising is my company, the likes of (beware shameless name dropping) Copland, Paglia, Quindlen, and Bloom. It is some of my better writing: though the argument is weak in sections my style hasn’t been as sharp as when the university had me pumping out an essay a week. Mostly the piece has the distinction of being rare; apparently there aren’t many rigorous looks at music censorship, at least not on the internet where this continues to get a fair amount of page views.

James Surowiecki’s Financial Page in the New Yorker has become a must read, a one-page column connecting topics such as macro-economic statistics, currency policy, and Argentina’s promptness policy in clear, concise, enlightening language. He’s coming out with his first book next week, The Wisdom of Crowds: Why the Many Are Smarter Than the Few and How Collective Wisdom Shapes Business, Economies, Societies and Nations. Kirkus Reviews says,

Multitudes are generally smarter than their smartest members, declares New Yorker writer Surowiecki. With his theory of the inherent sagacity of large groups, Surowiecki seems to differ with Scottish journalist Charles Mackay’s 1841 classic, Memoirs of Extraordinary Popular Delusions and the Madness of Crowds, which dealt with such stupidities as the South Sea Bubble, tulip-mania, odd styles of whiskers, and dueling. Our 21st-century author admits that there are impediments and constraints to the intelligence of large groups, usually problems of cognition, coordination, and cooperation. A group must have knowledge, Surowiecki states: not extensive knowledge, but rudimentary comprehension of basic fact with harmonized behavior by individual members. Finally, individuals must go beyond self-interest for the good of all. That’s how capital markets and Google’s algorithm work, and how science isolated the SARS virus.

Also see his article in Wired.

Only in the New York Times, in a story about Lance Armstrong and the Tour de France, would a sports article end with four paragraphs about wine…

‘…Leaving the red-wine district, the road headed toward Mâcon and its whites, including St. Véran, Pouilly-Fuissé, Mâcon itself and the deservedly little-known Beaujolais white…’

Wow, so many great books being published. Peter stopped by the other night with an actual hardcopy prototype of his user-centered design book. Owen and other luminaries lay down the CSS goods. Wert and company cough up a tome on Usability. And Rebecca’s Blog book is out. Don’t go crying that you’re bored this summer.

Poynter.org ‘exists to help journalists do their jobs better and to serve their communities’ – recommended.

I’ve been trying to learn more about established design language rather than reinvent everything. This article discusses page elements like folio lines and bylines that we could seamlessly migrate to our online design dialog.

Bill is re-thinking our relationship with the media: ‘When referring to a document published by a non-personal news source (e.g. newspaper, or even group weblog), credit the human being who wrote the article….This might….(a) improve the feedback loop by tracking quality of work by individuals, and (b) disintermediate publishers.’

Might bring us closer to the day when there’s a URI associated with author’s names.