If you’re a member of the AIGA and in New York, you might enjoy a fun little breakfast gathering planned for Tuesday, January 13, 2009…

Maybe youâ€™ve gotten one: the RFP that asks for mountains of miraculous work, for no money, delivered in 20 minutes. Or the one for a project so boring you wouldnâ€™t give it to an intern. This morningâ€™s Breakfast Club asks: Can we perform a Jedi mind trick and turn those nightmare RFPs into satisfying, rewarding work? â€¨Victor Lombardi, veteran consultant and teacher, will lead a discussion about rethinking how to conquer the dreaded RFP.

We’re pleased as punch to partner with our good friend Lou Rosenfeld at Rosenfeld Media to offer you Future Practice Webinars. Our first two events are Modern Web Form Design with Luke Wroblewski and Using Mental Models for Tactics and Strategy with Indi Young.

When we created them we wanted to accomplish two things:

For more information and registration, go to the Rosenfeld Media webinar page. For 20% off, use discount code NBSWBNR I’m just back from the Euro IA Summit held in Amsterdam, September 26-27th. Overall it was a good event with many warm, interesting people in attendance. I was considering attending PICNIC as well but as I heard it was “very corporate… lots of white men with PowerPoint” I spent my time with the city instead. Hearing a speech is slightly better than reading it or watching it online, but only slightly.

The Summit kicked off with a talk from Adam Greenfield called “Why I’m Not an Information Architect and You Shouldn’t Be Either.” Where the community used to be filled with electricity — taking on great new challenges — he lamented it’s now focused on creating wireframes for websites. This doesn’t feel like the field that will create Bruce Sterling’s Spimes. Adam’s focus lately has been Ubicomp, and he talked about how “power and grandeur lie beneath the user interface, in the API” and that “IT has dissolved into behavior” like the swipe of an RFID-enabled train card.

There’s a lot to react to there. I agree the field is not nearly as exciting as it was seven years ago, and this state makes a lot of us that are comfortable with innovation wonder what communities we should mix in and what IA should be (see Matt Milan’s thoughts for another perspective). At the moment I’m trying to pull back and see information architecture as a new but somewhat established field. Invention used to be necessary of everyone, but now it’s only needed from a few. Compare it to an established field like electrical engineering. At the beginning there was a lot invention, but now we know enough to simply do it. Today, some engineers continue to push the envelope with the design of microprocessors while others specify the wiring in the next model of speaker phone. I would expect IA to settle into the same spread.

Ruud Ruissaard of Informaat discussed the current state of content management which can be summarized by satisfaction rates around 37%. He advocated for a more holistic approach to address systems and processes and management. I have to think CMS will go the way of portals, with everyone realizing there’s a lack of flexibility in large installed systems. Instead, let’s move content to the cloud and pull it out with flexible APIs.
END_OF_DOCUMENT_TOKEN_TO_BE_REPLACED

I’m happy the concept design research and development I’ve been doing has received some attention, even though I haven’t had much time to share my work. That will start to change next month when I present some tools for generating concepts at the 2008 European Information Architecture Summit in Amsterdam, where I’ve been honored with the closing plenary position.

Last year’s German IA Conference had a great vibe and a wonderful group of people, I’m looking forward to more of the same in Amsterdam.

If I was in San Francisco, I’d go hear Paul Saffo…

“Effective forecasting is not merely possible, but remarkably easy,” he says. “All it takes is a simple shift in perspective and a few common-sense heuristics.”

Saffo draws on his study of the history of technology to give unusual perspective on the accelerating wavefront of current technology and what it means and will mean. As a Long Now board member, he slots forecasting neatly into long-term thinking.

But I’m in New York, so I’ll wait for the podcast.

Reflecting on his 25 years as a forecaster, Paul Saffo pointed out that a forecaster’s job is not to predict outcomes, but to map the “cone of uncertainty” on a subject. Where are the edges of what might happen? (Uncertainty is cone-shaped because it expands as you project further into the future— next decade has more surprises in store than next week.)

Rule: Wild cards sensitize us to surprise, and they push the edges of the cone out further. You can call weird imaginings a wild card and not be ridiculed. Science fiction is brilliant at this, and often predictive, because it plants idea bombs in teenagers which they make real 15 years later.

Rule: Change is never linear. Our expectations are linear, but new technologies come in “S” curves, so we routinely overestimate short-term change and underestimate long-term change. “Never mistake a clear view for a short distance.”

“Inflection points are tiptoeing past us all the time.” He saw one at the DARPA Grand Challenge race for robot cars in the Mojave Desert in 2004 and 2005. In 2004 no cars finished the race, and only four got off the starting line. In 2005, all 23 cars started and five finished.

Rule: Look for indicators- things that don’t fit. At the same time the robot cars were triumphing in the desert, 108 human-driven cars piled into one another in the fog on a nearby freeway. A survey of owners of Roomba robot vacuum cleaners showed that 2/3 of owners give the machine a personal name, and 1/3 take it with them on vacations.

Rule: Look back twice as far. Every decade lately there’s a new technology that sets the landscape. In the 1980s, microprocessors made a processing decade that culminated in personal computers. In the 1990s it was the laser that made for communication bandwidth and an access decade culminating in the World Wide Web. In the 2000s cheap sensors are making an interaction decade culminating in a robot takeoff. The Web will soon be made largely of machines communicating with each other.

Rule: Cherish failure. Preferably other people’s. We fail our way into the future. Silicon Valley is brilliant at this. Since new technologies take 20 years to have an overnight success, for an easy win look for a field that has been failing for 20 years and build on that.

Rule: Be indifferent. Don’t confuse the desired with the likely. Christian end-time enthusiasts have been wrong for 2,000 years.

Rule: Assume you are wrong. And forecast often.

Saffo ended with a photo he took of a jar by the cash register in a coffee shop in San Francisco. The handwritten note on the jar read, “If you fear change, leave it in here.”

Our lovely borough of Brooklyn now has its own web meetup…

Some of the best networking I’ve ever done is while walking my dog, Henry, in Prospect Park.

This morning, after I had just met yet one more person who works on web projects, I thought, we all take the train to Manhattan to attend Web meetups.

Why not have a Web oriented Meetup in Brooklyn?

Most of my Internet-design-etc. friends live in Brooklyn, most within walking distance of me, so I’m starting to think we’re developing a technie ghetto out here.

I’ve spent the Winter and a better part of the Spring planning and scheming, and I’m ready to get back into the fray in a public way. Here’s where you can catch me in the next few weeks:

I was in Las Vegas last weekend for the Information Architecture Summit. It’s a great balance of intellectual stimulation and after-hours fun, and the only problem with the record attendance is not spending time with all the wonderful people there.

I’ve gone the past several years, and it’s interesting to see the community maturing both personally and professionally. For example, I led a workshop on Internet business strategy and feared this audience might not want to stray far from the tactics of business, but I was happily surprised by the rich discussion.

And a couple I missed but everyone was talking about… BarCampNYC2 happened last weekend and was a great time. Holding it in the Microsoft offices was a little spooky, but at least that turned up some booty.

More than anything I was surprised at how little code talk there was compared to start up and design talk. Sessions like Entrepreneurial Improv Theater were a great chance for everyone to practice their VC pitching skills. Though it was obvious how hard it is for any one person, myself included, to make their brain stretch from code to UI design to product design to organization building to marketing to finance etc. I was impressed to see everyone try that stretch then collaborate to combine their skills.

Word is they’re capping the madness at 200 attendees, sign up now.

I really like the idea behind the IDEA Conference: recognize that big D design is inherently a cross-disciplinary affair, so invite the smartest (not necessarily the most famous) speakers to illuminate the connections among us through their practical experience. Peter Merholz is instigating, so it’s sure to be bound up with tons of enthusiasm and intellectual goodness.

If you’re interested, you should know the discounted reg is ending soon.

Eric Scheid, the man behind the visionary creation of the IAWiki, is at it again with Oz-IA, a conference for anyone putting information into digital media with a fantastic line up of speakers. 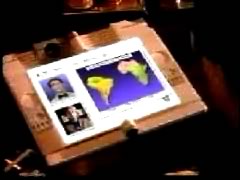 I’ll be discussing tangible futures in Philadelphia next Wednesday, courtesy of the nice folks at PHICHI and Colony Interactive. I hope to provoke the audience with a new look at an old practice and hear some feedback. I hope to see you Philadelphians there.

Since I’ll be teaching Business+Design at the Pratt Institute here in New York this Fall, I plan to check out the graduate show to get inside the heads of these bright young designers. The show is open to the public May 9-11.

Inspired by graffiti, t1-12 by Victoria Haroian is a living room chair that integrates healthy postures and spinal stretching into home furniture.

Jess and I thought it would be great to host an event where people could explore the intersection of business, innovation, and design in more depth than conferences allow. So along with some friends we created Overlap which will happen at the end of May. It’s small, non-profit, inexpensive, and centered on conversations. We’re hoping it’s going to be a very special and productive experience. There’s a few places left, if you’re interested in joining us drop me a line.