At Overlap 08 this past weekend we talked a lot about sustainability in all its forms, including sustaining nature. This was on my mind this morning as I cycled over the Brooklyn Bridge and saw a small video crew capturing some footage of the bridge. Surely, I thought, there’s so much footage of this bridge already, you hardly need more. But of course they do need their own shots since most of the existing video is copyright protected. So crews all over the world today are traveling and otherwise consuming resources to recreate what was created yesterday.

Creative Commons is the legal infrastructure to change all that, helping us share all our media which gives us no competitive advantage, such as video footage of the Brooklyn Bridge. I’ve been sharing and using creative commons media for my work, and it occurred to me this morning that CC not only makes media available for everyone’s use, it encourages reuse which is one of the better ways to preserve our natural environment.

Lifehacker has a great list of 6 ways to find reusable media.

There was an explosion in midtown Manhattan yesterday, about 4 blocks from where I was working…

The New York Times reported today that New Yorkers were “unnerved” which was certainly the case on the street when it happened. With the constant reminders of terrorism the government scares the shit out of everyone (and gains support for the war in Iraq?) instead of reminding us how incredibly resilient we are when needed.

The skinny here is that I’d like to work on correcting the uneven access to Internet jobs (great jobs, btw) by providing education to the disadvantaged. By disadvantaged I mean — here in New York City — mainly blacks and Hispanics, but generally those with lower income. I’m not sure how organizations who provide such services identify customers in this segment. I’ve already got some plans in the works for an educational service, and a small but important component of it is figuring out how to make the education available more widely.

Lately this has become a hotter topic in the blogosphere — with Kottke sparking a thread and Zeldman, Nick, Mike, and Anil supporting this point of view.

Someone asked, Where are the barriers then? Here’s a few:
END_OF_DOCUMENT_TOKEN_TO_BE_REPLACED

In HBR this month is a rare, methodical (and free) look at the financial effect of online communities via a study of eBay Germany…

Over the course of a year, we compared the behavior of community enthusiasts and lurkers with that of the control group. The differences were astonishing. Lurkers and community enthusiasts bid twice as often as members of the control group, won up to 25% more auctions, paid final prices that were as much as 24% higher, and spent up to 54% more money (in total). Enthusiasts listed up to four times as many items on eBay and earned up to six times as much in monthly sales revenues as the control users. The findings on first-time sellers were even more impressive: Compared with the controls, almost ten times as many lurkers (56.1%) and enthusiasts (54.1%) started selling on eBay after they joined and participated in customer communities.

The challenge for companies now is remembering that creating community means getting like-minded groups of people together to do things they like doing and not just installing some community software.

In City Planet, Stewart Brand describes the current massive migration to the world’s cities and the reality of squatter cities. The piece changed the way I understand cities and how the world population is evolving. Here’s some quotes…

The growth of cities has led to demographic trends exactly the opposite of what many experts have predicted… Demographically, the next 50 years may be the most wrenching in human history. Massive numbers of people are making massive changes. Having just experienced the first doubling of world population in a single lifetime (from 3.3 billion in 1962 to 6.5 billion now), we now are discovering it is the last doubling… Just as the population exploded upward exponentially when the birthrate was above 2.1, it accelerates downward exponentially when itâ€™s below 2.1. Compound interest cuts both ways. Fewer children make fewer children.

END_OF_DOCUMENT_TOKEN_TO_BE_REPLACED

Registration is open for the Information: Design, Experience, Access conference happening at the Seattle Public Library, October 23-24, 2006. It looks to be a fun, thought-provoking event.

“Just as it was important that Broadway not remain in the dark after Sept. 11, it’s important that we start thinking about the future despite all the very depressing news around us.” — Bill Hines, managing partner of a New Orleans law firm, on plans to revive parts of that city quickly. 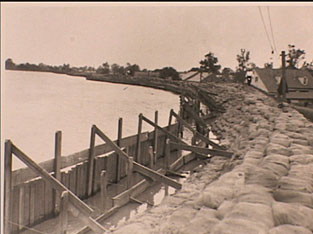 New Orleans was founded in 1718, specifically in the Autumn. The following Spring and Summer the French settlers realized their high ground was not high enough to avoid flooding, and so the building of levees began. That building — eventually assumed by the Army Corp of Engineers — has continued ever since. Some say it “set off an environmental chain reaction that helped destroy the natural barrier protecting New Orleans from catastrophic storms.”

In the emotion surrounding the World Trade Center planning, we suffered a failure of imagination. The symbolic importance of the location made new architecture a political time bomb.

Without the emotional weight of terrorism, the planning in New Orleans doesn’t have to be this way. Imaginations already bear the fruit of honest thinking: Make It an Island, Raise the Ground, Restore the Marsh, and Build Diversity. These are the kind of bold ideas we need if billions are to be spent rebuilding New Orleans, but they need to balance with the human needs and emotions of the people who live and work there.

And if we really use our imaginations, we will realize that not rebuilding is also a viable option.

…are at the 92nd Street Y, along with an impressive roster of classes and events. Start with the list of lectures.

There’s a vestigal bit of elevated railray called the High Line that runs through about 20 blocks of the far west side of Manhattan. A contest to turn it into a park has resulted in the selection of Field Operations and Diller, Scofidio & Renfro who proposed a mixture of concrete paths and gardens. I’ve been psyched to have a new walking spot, as I live about 75 meters from it. Supposedly, when I walk out my front door and turn left I’ll see this. That spot on the left where the kids are dancing presently borders a gas station/Subway/Dunkin Donuts combo, the corner presently looking like this. So this is quite a change in feel, if we’re to believe the proposal.

I have the usual Jane Jacobs-influenced reaction, which is you’re messin’ with the character of my neighborhood with your modernist crap. On the right in these pictures is my local, the Half King, one of the best pubs in the city, and I fear it overrun by the club kids moving north from the meat packing district (which has gone from stimulated to overbearing in about a year). I wished that, instead of spending 20 million dollars, they would just clean it up, plant vigorously, provide access, and let us use it, as Paris did.

My heart breaks when I see newbie tourists in Manhattan. The young woman the other day carrying armloads of luggage in the rain politely asking the cab driver if he drives to Queens. Here’s two tips to avoid the worst:

Bonus tip: on the subway, if you don’t get a seat, you’re gonna wanna hold on to the hand rail, really.

Despite having found a wonderful community of like minds in New York, I’m always envious of the vibrant new media scene in San Francisco. Last night I crashed a post-seminar drinkfest held by Adaptive Path and finally, randomly, met (in person) Veen, Berry, Steenson, and Blood, among other fine folks. Hopefully Merlin will post his pics. Rebecca commented that I’m younger and more attractive than she imagined, which leads me to think my blog persona is a grumpy crank.

I left the tapas and sangria early to fly home, away from the sun, descending through the clouds into the rain soaked, cursing, cold, Jamaica Bay.

“There is an assumption about meetings and gatherings that’s so old it’s almost genetic. Conferences ask people to come as passive information gatherers. We’re drawn by big name speakers and then sit and wait for information to flow downwards. Yet when you ask people where they learned and contributed the most, they’ll inevitably say it was dinner with Tom or a passionate discussion over drinks with Katie and Jack. We need to re-evaluate how we create large group events to take advantage of the way we’re beginning to see, create and connect the world today. Our old style hierarchical models just aren’t as effective anymore, and current conferences are still based on them.”

Adam recently hooked me up with a friend of his that was tight with all the beatniks I used to hang out with at Rutgers University. We re-lived days of hosting bad radio shows, writing dubious poetry, and playing self-confessional folk music. And yesterday, Michael and I discover we’re from the same town and know people in common, one of which was a childhood friend of his and a high school buddy of mine. At one point Michael and I were living a couple blocks from each other.

The real life connections are still more exciting than the virtual ones.