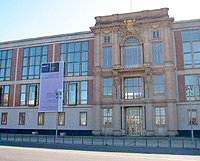 In Berlin over the holidays, we walked passed this beautiful building with a classical center and modern wings. It’s the former StaatsratsgebÃ¤ude (East German government center), the portal from a pre-war city palace which the East Germans built around. It was recently restored and only days away from the becoming the Berlin campus of the European School of Management and Technology.

This is a curious thing, as the Germans embrace a greater sense of class equality than, say, the United States. Private schools are rare, and the absence of a world-class management or economics school is conspicious when the Brits, Swiss, and French sport such institutions. My wife explained the formation of this school was controversial, and when laws govern whom a university may hire as a professor, I’ll be interested to see how entrepreneurially they can function.

I will say the spirit of the place, based on the language on their website, strikes a chord with a progressive, creative type like myself. Listen to this:

Our school is inspired by the Bauhaus vision. Our commitment to this tradition places us in direct line with the principles of the founding members of the Weimar Bauhaus around the person of Walter Gropius. The latter gave substance to the daring idea to make creativity in architecture and design subject to the mastery of technical craftsmanship, and in this manner, to eliminate the boundary between free and applied arts. In the same way that the Bauhaus elevated the role of craftsmanship at the time, the application of managerial knowledge is intended to attain a radically new status at esmt…

This means engineers and scientists who can turn technology into profitable business, financial professionals who can go beyond analysis, architects and lawyers who can develop and lead new business…

“We now accept the fact that learning is a lifelong process of keeping abreast of change. And the most pressing task is to teach people how to learn.” — Peter F. Drucker

Here’s one interesting research brief from the site:

People take more risks when they judge from experience rather than from other sources of information.

The study asked 100 students at a technical university to make six decisions. Half got a description of the risks, and the other half did not. For each decision, before making your final choice you could try out different answers to see what result each gave. Then you moved on to the next decision. So both groups were able to learn from experience, but only one had description too.

“Be a part of the design thinking movement“

The specific objective of the seminar is to assist participants to “see” the visual world more insightfully and to speak about it more articulately. By paving the way to design literacy, Design 101 prepares managers to lead energetically, articulately, and effectively in the dynamic dialogue now taking place at the intersection of management and design.

Some time ago I helped create a classification scheme for a very large company’s website. Several months into the project, when most of the coding to power this scheme was finished, some executives objected to it. Some of the objections made sense, and with some tweaks we were able to incorporate additional concerns like marketing issues without harming usability. But some requests flew in the very face of the reasoning behind how the classification worked (in usability testing, not just theoretically). And a lot of the classification wasn’t even innovative; it leveraged what had been working for sites like Yahoo for years.

Somehow this reminded me of After the Dot-Bomb: Getting Web Information Retrieval Right This Time. In it Marcia Bates argues that the rest of us were reinventing information seeking when the library and information science field had already solved many of these problems. In the light of my work’s executive manhandling, I saw Bates’ insistence that we were ‘ignoring‘ this discipline as inadvertently admitting, "We in the LIS field failed to communicate what we know and make it accessible to those who need it."

I’m not laying blame; I don’t think anyone was prepared for the Internet explosion of the 90’s in which millions of people suddenly had access to a plethora of information used in new ways. But it would be nice if the absolute basics were universally understood. In my example of the painful case above an absolute basic would be ‘Classification is complicated and particular skills are needed to do it effectively.‘ And only as much argumentation as is necessary should accompany that point to make the point.

In the pursuit of perfect information science, our basic taxonomies still suffer from arbitrary decisions. I hope the information architecture field will communicate these essential points – recognizing that the best is the enemy of the good. It’s a matter of summarizing in executive-sized bits ideas similar to what the first principles do for us.

Maybe these are written as patterns? Not for the sake of compiling into a language and used, but just for reading and learning.

This idea cropped up listening to Brenda Laurel in Texas. Teenagers use SMS more than email or the phone. Lots of carefully constructed, tiny, messages. How will this generation cope with the skills needed to find a good job in the market of the 2010’s? What sort of IA education do they need?

At the IA Summit, Peter Merholz commented that one issue with the phrase user experience is that it’s often misused as synonymous with user interface. I’ve heard this as well, and feel it’s only a matter of time before we start hearing, ‘The user experience is too green, can you make it more blue?‘

Perhaps simply adding an apostrophe-s could rectify this, speaking in terms of the user’s experience. Suddenly it is the user that has ownership and not the designer. It turns out Peterme already thought of that, but we haven’t given it a thorough try. I’m starting to.

The papers and presentations from IBM’s Make IT Easy conference are up. Among them are presentations by Marti Hearst, Nathan Shedroff, and Clifford Nass.

When I see reports like this wonderful study on the LCDs in the Space Shuttle, I want to abandon all this blathering web work, get my Ph.D, and be state of the art. Designing better medical device UIs might nicely combine my love of design and my idealist longings.

I had heard of DBN a while ago, but didn’t realize you could download it. What’s this, the MIT Media Lab actually releasing something that will benefit the real world? Link via Andrew.