Late last year I finally became frustrated with using whatever lame pen happened to be on hand. I did some research, tried several options, and corrected the situation. Here’s a summary:

On the inexpensive end, many people like the Pilot G2, though I think the Uniball Signo 207 is as good. Both are refillable rollerballs.

Unlike in Europe where my friends were required to use fountain pens in school, they’re rare in America. Following some recommendations I tried The Lamy AL – an aluminum version of their inexpensive Safari plastic line. Fountain pens can be fussy, but when they work there is nothing smoother and more beautiful. I tried using this all the time, but now I reserve it for letters. It costs about $30. 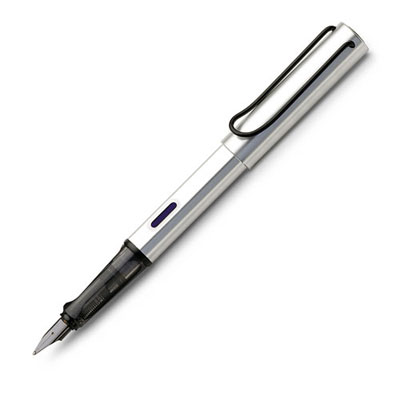 I also wished for better markers. Ideally I could sketch with a broad tip and write with a fine tip. Why doesn’t someone put them in the same form factor? After searching I discovered Sharpie does just that, and sells them in a pack of four colors.

I received a mid-century Mont Blanc ball-point as a gift. The quality of the metal casing and the simplicity of the 3-piece design is wonderfully pleasing in the hand. I use it with a Mont Blanc rollerball refill and it’s become my everyday writing instrument. I find I like rollerballs with a little more resistance because they slow down the pen a little, allowing me to write more legibly. You’d think eight years of Catholic school would have done that for me, but at least I’m correcting for it now.