Much has been written about the importance of failure in design. To improve things we need to try new approaches which sometimes work and sometimes don’t. Straight forward enough, at least to designers.

But business managers won’t go near that. “Yes, I need to fail!” Bull-shit, you ain’t gonna hear that in many management offices. So I’ve been thinking about how to re-frame the word “failure”.

“Iteration” is pretty good, but implies each pass is good and just keeps getting better. Michael Linton, CMO of Best Buy, has trials he calls “ready-fire-aim” activities. And I just thought of a new one:

This is riffing off two different words. One is “the ask” which is more commonly being used as a noun, meaning “the request” (annoyed the hell out of me for a while, but I’m adjusting). But mostly try is a riff on the rugby use of the word which refers to the major way of scoring points in that game, equivalent to a touchdown in American football.

How might I use it? The sketch looks great, let’s make one in foam core and go for a try with some customers…

It could be a wonderful evocation of cognitive dissonance, as it would simultaneously mean to make an effort as well as score! 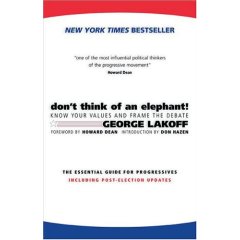 I finally got a around to reading Don’t Think of an Elephant! in which George Lakoff applies his linguistic and cognitive ideas on framing to American progressive politics. It’s a compelling, important book, and the theory can be used anywhere, particularly the hierarchy of vision -> values -> principles -> policies -> ten-word philosophy. It’s also short, there’s no excuse not to read it.

Reverse engineer the conservative phrases: Bush said, “We don’t need a permission slip to defend America.” This invokes the parent-child relationship; we understand large social groups in terms of small ones. He specifically used the strict father frame (see James Dobson‘s Dare to Discipline). Essentially it is a father who can

This leads directly to the morality of self-interest and Adam Smith’s free market capitalism.

Progressives have a nurturant parent model that is gender neutral and assumes children and the world is a good place, and our job is to make it better. The values are

The conservatives have factions, but they found their common interests and invested in institutes and think tanks, which paid off in media exposure.

The progressive Enlightenment emphasizes truth, but the truth must be presented in way that fits people’s frames. Concepts are instantiated as synapses in our brains, and facts that don’t fit aren’t strong enough to create new structures.

Self-interest forms the basis of conservative values, but doesn’t act on the surface. People will vote against the candidate who gives them tax cuts if they identify with the values of the other candidate, even if that’s a worse choice for them personally.

Tailoring issues to polls can be useful, but the conservatives real method is to say what they idealistically believe, they talk to their base using the frames of the base. The undecided in the middle have multiple frames present, and you can activate one with your language. Clinton’s “welfare reform” and “the age of big government is over” did this by stealing the enemy’s language.

Taken further it becomes Orwellian — opposite — like Clear Skies and Healthy Forests. It signals where they are pushing unpopular initiatives and are vulnerable. See Frank Luntz. Deceptive frame is morally reprehensible and eventually backfires.

But the words must follow from ideas. The idea, the frame, is already is people’s minds. If it isn’t, you suffer from hypocognition, the lack of a needed concept.

(It occurred to me while visiting Germany that Germans don’t mind paying their high taxes because it’s a great value; they get awesome service for their tax dollar. I think Americans are used to a certain level of service and figure taxes will go up without a corresponding increase in service. Could service level in the business sense be used in government?)

Progressives are often on the defensive because the conservatives are better funded. Progressives fund grassroots, conservatives fund infrastructure. The right cuts taxes, the left helps the poor, and the right privatizes the left.

Voters vote based on their identity: who they are, what values they have, and who and what they admire, more so than based on self-interest.

Schwarzenegger = stereotypical strict father. He used a Voter Revolt frame, which turned around is a Right Wing Power Grab frame, claiming to represent the people while leveraging the resources of the Republican infrastructure.

When you understand the strict father model, you understand how gay marriage is such a threat to everything conservative. Arguing for gay marriage must go beyond the pragmatic benefits of marriage, the frame “freedom to marry” evokes the American ideals open to all. It’s about equal rights and having a state that provides them. Appeal to sanctity rather than basic economic fairness.

To extend the strict father metaphor to war, anything you do against the evil side is good, whereas progressives would view certain actions as evil even if they’re used to battle evil people.

Addressing the culture of despair suffered by Islamic communities in the middle east might make them more willing to take more moderate positions towards American culture and other elements they object to.

Nixon’s “I am not a crook” illustrates that the use of negatives frames the situation the wrong way, we must use positive language.

…if foreign policy doesn’t follow from moral norms, contradictions arise, such as being anti-terrorism while ignoring terrorism of Russians and Pakistanis or sponsoring terrorists ourselves.

A perpetual state of war contributes to the conservative agenda by sapping money from social programs (and not raising taxes).

Lies, in the case of President Bush’s reasons for going to war, can be explained in terms of exaggerations, misleading statements, mistakes, rhetorical excesses… A lie may only be a lie if that person didn’t believe what was said. And ultimately lies are minor compared to the betrayal of trust.

Use rhetorical questions: “Wouldn’t it be better if…”

Always be on the offense. Don’t negate the other person’s claims; reframe. Never answer a question framed from your opponents point of view.

Tell a story where your frame is built into the story.

Use wedge issues: “Do you support a Military Rape Treatment Act to allow our raped women soldiers to be treated in military hospitals to end their rape-induced pregnancies?”

Terry just taught me clean washing greenwashing, which is when a company smears on the energy-efficient PR while continuing their old inefficient ways.

And now there’s hygrid, a hybrid of electricity from the grid and rolling your own.

Chatting with some IAs recently, we wondered into grammatical territory where to my relief everyone felt passionately that it’s alright to end sentences with a preposition. One or two people said that was a rule carried over from Latin that shouldn’t apply to English. Winston Churchill illustrated the preference of comfortable convention over artificial rule:

When an editor dared to change a sentence of Churchill’s that appeared to end inappropriately with a preposition, Churchill responded by writing to the editor, “This is the kind of impertinence up with which I shall not put.”

It’s a good thing the Germans know how complex their language is. They’ve invented two powerful tools to help learn it:

When shares of a company plunge on the New York Stock Exchange the trader responsible for that listing must buy into the selling, in their words, she must ‘catch the falling knife.’