Of all the images to come out of the iPad announcement, the one struck me the most was less about the device and more about the experience of it: 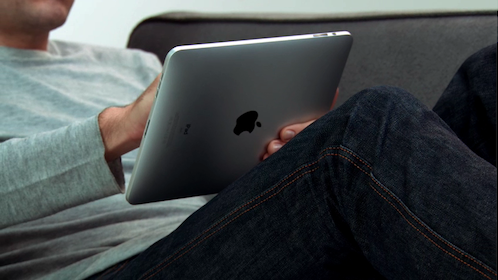 Lying back on the sofa — isn’t that a nice way to be?

And sitting or lying on the sofa with a 9.7 inch screen means we’ll typically hold this about 2 feet (.6 meter) away from our eyes, versus 1 foot with an iPhone, which means you can rest it on your lap. While some may buy the dock, putting the iPad on a surface means having to uncomfortably lean over it. I think lounging will be much more common. We can do this with a laptop, but the separation of output (display) and input (keyboard and trackpad) is disjointed in comparison. And the iPad will be a little awkward and heavy to hold aloft like a phone.

Consequently the mood while interacting with an iPad may be more relaxed. The interaction has the potential to be more passive, though not necessarily. We’ll make bigger gestures and pivot at the elbow and shoulder rather than the wrist. We’ll scroll/size less than on a phone, using more eye movement to scan the screen. And while Apple has had to succumb to menus to make more functions available, we have the potential for powerful new forms of direct manipulation.

As a designer I’m tempted to display more, denser visual content at one time that a person can sit back and absorb, and offer control with fewer, grander gestures.

Given the physical similarity, it’s tempting to look at the iPad and call it a big iPhone. But I think the posture we adopt and interaction with the device will make it an experience unlike a phone or a laptop.

Aside: how long until someone designs a lounge chair specifically for optimal iPad use?!

Niti has an intriguing post including this quote describing service for the Nokia 1202:

the new devices will allow users to set up an e-mail account on Nokia’s Ovi Web portal without ever going near a PC. That’s an important distinction for the millions of mobile-phone users who live in regions without reliable electricity, much less computers and Internet connections. “It gives those millions of users their first identity on the Internet,” says Alex Lambeek, Nokia vice-president in charge of handsets aimed at low-income users.

A brilliant move, IMHO, and makes me wonder about which other bits of the PC-oriented Internet could be mobilized.

But Niti goes on to explore how an email address changes our identity or online presence differently.

CBS plans to announce on Wednesday that it is trying one of the first serious experiments with cellphone advertising that is customized for a personâ€™s location. Its CBS Mobile unit is teaming up with the social networking service Loopt, which allows its subscribers to track participating friends and family on their mobile phones. More from New Challenges… On Saturday night a sub-group — emboldened by a smuggled bottle of wine — sketched out a new manifesto for information architecture. Outward looking, devoid of definitions, accessible to the common person. On Sunday Mr. Greenfield parachutes in to advocate for what could be the impetus to the manifestis’ work: Everyware, a vision of ubiquitous computing with a set of principles guiding and urging designers to create responsibly the electronics of every place. Adam’s in-person plea created a sense of urgency for most of us to consider how to connect our skills with devices not yet invented, that we should invent. It was the perfect compliment to Dan Brown’s questioning of human vs. technology control of content.

More notes are on the wiki, and there’s photos.

Just about all T-Mobile voice mail plans provide “fax mail”. Someone can send a fax to your mobile phone number and the voice mail system holds it there. When you check your voice mail you can specify the number of a fax machine to which to forward the fax. Handy when traveling and you want the fax wherever you are.

Update: Fax mail may be turned off by default(!), mine was. Call customer service to get it turned on.

So I took advantage of the $49 Hiptop special and finally migrated from my ancient Palm. When reading all the complaints of the browser rendering I grouchily asked, ‘Who really wants to browse the web on a screen that big anyway?‘ but actually, now that I have one, I do. Having access to the Web almost anywhere is awesome.

I find I have better control over my data too since the phone is always with me, whereas the Palm was always two steps behind, in my bag somewhere.

And now that I can see through the eyes of the mobile user I found it necessary to create a mobile version of NBS.

Subsequently I have a Palm III with RhinoPak case and GoType keyboard for sale for any reasonable offer ($30?)

1. The phone contains everything that you have at home in your computer.

2. The phone becomes an entertainment and gaming device for youth, possibly with a display showing the person you’re talking to.

3. The phone carries everything that you have in your pocket.

Leave it to the Swedes to come up with a smart, sensible tech magazine that makes sense in 2002, an accomplished forty-something to Wired’s sniveling adolescence. It’s published by a venture capital firm in a socialist country.

Unfortunately not all of the articles are online, like Diane Coyle’s wonderfully honest and passionate “The Promise of High Trust Economy”: ‘…the more complex the technology basis of the economy, the more complicated and subtle the society needed to operate it. The high-tech economy…depends crucially on the exchange of ideas. And that means people engaging with other people.‘