I’m learning the hard way that presenting concepts may mean giving them to someone else to show on an unknown laptop across the world somewhere. I can control for many factors by simply making a video of my design concept, with voice over. But that laptop won’t get the audio loud enough, and no one ever has a cable to plug into a projector’s speaker.

Here’s what I would like in my show-off-my-design-concept speakers: 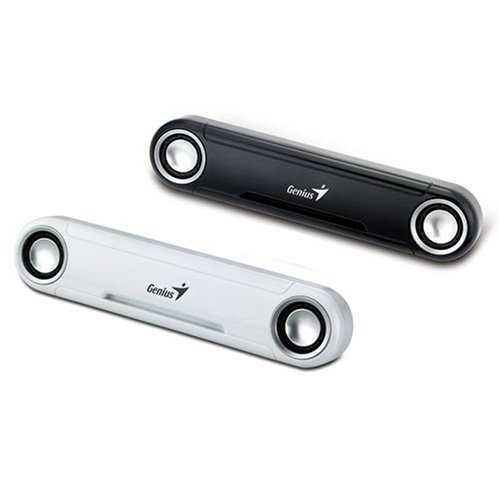 This study — Who Captures Value in a Global Innovation System? The case of Apple’s iPod — is one of the best I’ve heard of in a long time. The researchers traced the parts and assembly of the iPod and attributed the value generated by each step by part and by country. A few key stats: of a $299 video iPod, Apple gets the largest piece of the pie: $80. The other portions are relatively small; China only gets $4 for assembly.

Hal Varian of the New York Times made this key observation about how Apple’s capabilities generate their benefits:

The real value of the iPod doesnâ€™t lie in its parts or even in putting those parts together. The bulk of the iPodâ€™s value is in the conception and design of the iPod. That is why Apple gets $80 for each of these video iPods it sells, which is by far the largest piece of value added in the entire supply chain.

Those clever folks at Apple figured out how to combine 451 mostly generic parts into a valuable product. They may not make the iPod, but they created it. In the end, thatâ€™s what really matters.

I’m encouraged by studies that highlight the value of concept design given my work in this area. Here’s a question for you: how would you most like to learn more about concept design: a book? videos? something else?

My MIG colleague Scott Hirsch recorded a podcast with PodTech and discussed technology-focused startups that drive by the rear-view mirror, open vs. closed networks, and why it’s the crazy-brave people that drive innovation.

If you’d like to see the process of a disruptive technology take hold before the disruption, look at the home audio industry.

In the past year or two home audio has taken some interesting turns. Before you basically had two configurations: simpler, inexpensive all-in-one systems or more flexible and expensive separates. Cambridge Soundworks, then Tivoli, erased the difference by bringing us small, high-quality separates mostly by reducing speaker size and increasing speaker efficiency, thereby requiring smaller amplifiers.

Next we saw stereo-computer communication and integration. There’s stereo components with computers inside (e.g. CD+DVD+MP3 for $39) and “sound cards” have turned into receiver replacements. Naturally there’s the next generation of devices that distribute the signal throughout the home. The big question for the consumer amid this mess is: does my computer become the audio hub, do I bridge the computer and stereo together, or do I buy duplicate functionality and keep the systems separate? Expecting the consumer to be home audio network architect isn’t helping anyone, except those who install custom setups for the wealthy.

The phase that’s emerging now is the audiophile killers, true audiophile sound in small packages at previously unthinkable prices. This was started by 47 Labs’s Gaincard amplifier that works not via tubes or traditional solid state circuitry but by using a single chip for amplification. Because it so reduced complexity, the DIY contingent created copies called gainclones that achieve the same sound quality at prices you might pay for an average consumer amp. The next, inevitable, step was to mass produce this approach, which is what Sonic Impact did with the Class T amp ($39, and as low as $19 recently at PC Mall). Audiophiles are going ga ga over it.

The next phase — the distruptive bit — is a when a clueful industrial designer (e.g. Bose, Apple, Griffin, or Taiwan’s BenQ) leverages the chip amp’s low complexity, price and small size to create a $199 stereo system that also solves the audio network architecture problem. The latter, IMHO, means a stereo that is still a stereo (or home theater) that let’s the computer handle the digital audio file part of the equation. This is based on the premise that listening to music/watching television is usually, for most families a different and sometimes simultaneous activity from computing. In this scenario, all the stereo has to do is receive an audio signal over wi-fi and — via a user interface — send some simple signals back to the computer (“Give me the X .mp3 file now”). The computer continues to do everything it does well, with a simple mod to the mp3 player software to broadcast music over wi-fi, as iTunes does today. This results in ease-of-use that crosses the usability chasm, and control over music selections from either the computer or the stereo, something you don’t get with most systems today. All this in a great sounding, small package (chip amp + efficient, small speakers) that will be better than anything home audio can currently offer short of a professionally designed custom system. We could see this by the end of 2005, with competitors playing catch up in 2006.

Last night my wife and I realized we both had conference calls from home at the same time. My group wanted to use Skype, so she was free to use our landline, a Vonage (VoIP) connection. This means we were using two different devices to push and pull audio down the same cable modem connection. Theoretically it’s pretty neat. In practice the poor Motorola VoIP adapter supplied by Vonage couldn’t keep up and dropped both of the connections, twice.

So far the home broadband suppliers haven’t had to provide rigorous minimum bandwidth, but when more of us start using the connection for synchronous communication we’ll want bandwidth like water: as much pressure as we need, whenever we need it, cheaply. Service level agreements for the home user could be in our future.

If you’re using iTunes/iPod/QuickTime 6 you can start burning music in AAC format, the audio spec for MPEG-4. The encoding is better than MPEG-3 resulting in smaller file sizes (at the same bit rate) and higher quality sound. Mp3s couldn’t match CDs for sound quality because they relied on earlier, imperfect perceptual coding algorithms; AAC comes much closer.

You can make this change in iTunes preferences. Upping the bit rate also helps, I’ve got mine set on 192 bps. 128 is more common and uses less space, but 192 sounds better. You can always down sample it later if you run out of space, but you can’t up sample without re-burning the track.

You can tell Apple is behind this migration because they’re selling songs in their store in AAC format, and iTunes even has ‘convert to AAC’ menu choice, making the process easy. I’ve been holding off on the mass burning of my CDs due to mp3’s limitations, but now I’m ready.