Can these disciplines be explained in two sentences?

To catch you up, Motrin posted the below ad and people, particularly baby-carrying mothers, were so offended that the makers of Motrin pulled the ad.

Many of the offended people (“Motrin Moms” there were dubbed) were on Twitter, as well as blogs and YouTube. As a result, marketers are starting to get scared of social media, just as social media is taking off as a legitimate communications approach.

But another way of looking at it is, better the Motrin ad underwent a social media firestorm than a mass media firestorm. END_OF_DOCUMENT_TOKEN_TO_BE_REPLACED

Here’s a small but important lesson about getting field research done in a corporate environment. If you propose research, folks may hear that word and think R&D, and that’s not capitalizable, i.e. the cost can’t be allocated against a particular product/service. That means the cost can’t be delayed and counted against future revenues (delaying costs can be good for budget reasons or simply for the time value of money). This is because if you’re doing work for a project you have a much higher degree of confidence it will provide a return versus doing pure research & development.

If you can make it clear that the work is applied against a particular project, great, but otherwise be careful of using the word research to people who might interpret it in the accounting sense of the word. As an alternative, how about information gathering? Any other suggestions?

Last week a friend of mine was telling me about how new products are created at her software start-up. Essentially it consists of salespeople talking to current and potential customers about an existing product and asking, “What else would you like it do to?”

That in itself is a fine question that acknowledges the customer as having valuable ideas. But in this case, and others I’ve seen, it comprises the entire idea-generation process and grows out of a requirements mentality that looks superficially at customers’ needs. The organization substitutes the customer for the business analyst and lacks a business model and product concepting process. Instead of having a vision of how the company could satisfy unmet needs or create new markets, they’ve abdicated responsibility for new product development to the customer, which doesn’t always reveal useful insights.

I spotted this two page spread in Forbes magazine. It’s IBM using a persona (“Lois”) to get companies to think about ‘customer centricity.’ It’s text heavy and superficial, but if it increases customer centricity than I’m all for it. 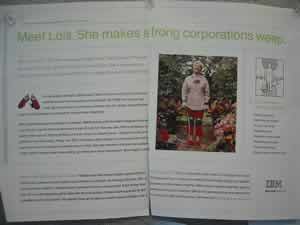 Similarly, Brett Lider points to Microsoft’s MSN personas. They’d be denounced by Cooperites based on the sheer number of them (one persona for every age group?). More sins abound: ‘Age 14-17, Amanda is at the pivotal point in her life where she is beginning to define her brand affinities.’

She’s age 14-17? Very realistic. She’s developing her brand affinities? Is that what her and her friends do after school? By putting a face on demographics they end up with a face on demographics, not a realistic depiction of a person that we can use our imagination to design for. But this is just a marketing tool, MSN trying to help advertisers advertise. Will it degrade the idea of personas for design? I hope not. Hopefully it’ll turn marketing on to the grooviness of customer centricity.

The One Number You Need to Grow by Frederick F. Reichheld is a great, short article on using one-question surveys that measure loyalty correlated with customer behavior. Highlights:

‘Every month, Enterprise polled its customers using just two simple questions, one about the quality of their rental experience and the other about the likelihood that they would rent from the company again. Because the process was so simple, it was fast. That allowed the company to publish ranked results for its 5,000 U.S. branches within days. …the company counted only the customers who gave the experience the highest possible rating…By concentrating solely on those most enthusiastic about their rental experience, the company could focus on a key driver of profitable growth: customers who not only return to rent again but also recommend Enterprise to their friends.’

‘In most of the industries that I studied, the percentage of customers who were enthusiastic enough to refer a friend or colleague — perhaps the strongest sign of customer loyalty — correlated directly with differences in growth rates among competitors.’

‘Companies have tended to focus on customer retention rates, but that measurement is merely the best of a mediocre lot…they basically track customer defections’

‘For a while, it seemed as though information technology would provide a means to accurately measure loyalty. Sophisticated customer-relationship-management systems promised to help firms track customer behavior in real time. But the successes thus far have been limited to select industries, such as credit cards or grocery stores, where purchases are so frequent that changes in customer loyalty can be quickly spotted and acted on. ‘ – Behavior is difficult to study and quantify, lots of data might help.

‘My personal bet for the top question (probably reflecting the focus of my research on employee loyalty in recent years) would have been "How strongly do you agree that [company X] deserves your loyalty?" Clearly, though, the abstract concept of loyalty was less compelling to customers than what may be the ultimate act of loyalty, a recommendation to a friend.’ – This question raises the same kind of emotion that occurs during real behavior, and might help explain why it’s a better indicator of behavior.

I like how he used a 10-point scale then clustered the results into three types of customers, avoiding “grade inflation.”

In Tekka, Cathy Marshall addresses a topic that’s been stirring in my mind lately…

‘…do scenarios and personas actually help, or do they just create a warm illusion of user-centered design?‘

She spends some time illustrating how products can drive personas…

‘Want to make personal security and encryption a necessary feature for [our persona’s] email application? Let’s just give her a secret life in which she’s rekindled a dormant college romance via email.’

But we know that’s not a problem with personas, that’s just people creating personas improperly (personas, unlike guns, don’t shoot unsuspecting children, it requires a designer to do that). Research drives personas, and personas drive design, and design leads to products. Reversing that is incorrect practice, not a flaw in the practice.

I’ve also seen a tendency to focus the scenario too much on how a persona uses the website to the exclusion of other activities. When Marshall writes, ‘Notice, for example, that people use other communication channels besides their computers‘ it reminds me that personas should capture how people arrived at the site, what other sites they’re looking at, and what they do when they leave.

We know that to do this work properly one needs empathy with the users. And yet, people are, as George Bernard Shaw observed, bloody apes. People, some of them, can be nasty, messy complainers and it’s easier to just not interact with them. And this is why user-centered design is such a hard sell, because business people don’t want to deal with their customers. It’s easier to keep them at arms length – or further – with surveys and other market research. Personas and scenarios too help us keep people at arms length. Of course, they assume we’ve done our contextual inquiry yada yada beforehand, but that shouldn’t stop with the personas. In the tradition of the best industrial design it doesn’t stop, designers are always working with users. Researching and testing is ingrained in the process, not separate steps in the project plan. Marshall says,

‘Don’t just use scenarios and personas. Pay attention. Observe. Reflect. We’re all out in the world we design for.‘

Which, to me, implies participatory design. It means working more closely with those bloody apes that drive us crazy. This is the hard work we have to do to arrive at a great product. It means I don’t believe personas can substitute for interacting with users during post-research project phases. I don’t know a lot about participatory design yet, but I think it’s time to learn.