When two of the really amazing thinkers I admire — Ken Bain and Jeanne Liedtka — both say they admire Carol Dweck, I figure it’s time to figure out who Dweck is. Her latest book, Mindset, provides some fascinating psychological support for the power of play and prototyping, as she says…

People who believe in the power of talent tend not to fulfill their potential because theyâ€™re so concerned with looking smart and not making mistakes. But people who believe that talent can be developed are the ones who really push, stretch, confront their own mistakes and learn from them.

Janet Rae-Dupree, writing in the New York Times, reveals an interesting connection between Dweck and the iPhone:

END_OF_DOCUMENT_TOKEN_TO_BE_REPLACED 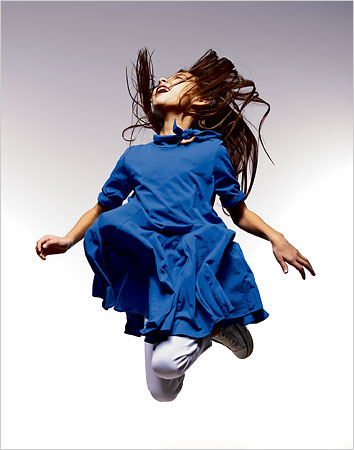 Business design people talk a lot about the importance of play at work, the sort of improvisation that — because it is both fun and challenging — encourages us to persist at an activity by generating new ideas. Robin Marantz Henig’s recent essay in the New York Times, Taking Play Seriously, focuses on the scientific study of play. In short, play seems to help animals develop in important ways, but we’re not sure exactly how it helps us or if we can develop just as well without it.

But here’s an interesting thought for us adults…

…Bateson, a prominent play scholar who recognizes the quandary posed by equifinality, suggested that play is the best way to reach certain goals. Through play, an individual avoids what he called the lure of â€˜â€˜false endpoints,â€™â€™ a problem-solving style more typical of harried adults than of playful youngsters. False endpoints are avoided through play, Bateson wrote, because players are having so much fun that they keep noodling away at a problem and might well arrive at something better than the first, good-enough solution.

I’m definitely guilty of what the skeptics of play call “play ethos,” the reflexive, unexamined belief that play is an unmitigated good with a crucial, though vaguely defined, evolutionary function. Still, I hit a lot of false endpoints in the business world and can’t help but think we’d arrive at better solutions if everyone were just a wee bit more playful.

Update: Here’s a story on NPR on play and the importance of self-regulation… “we’re often using it to surmount obstacles, to master cognitive and social skills, and to manage our emotions.“

By bringing together top creative executives and international leadership experts, the Berlin School will pave the way for new standards in communication and leadership, fostering global discourse on creative leadership in entertainment, journalism, media, advertising and marketing.

At its heart is the Executive MBA in Creative Leadership, an 80-day part-time program comfortably spread over 18 months, taking place in Berlin with study trips to Chicago, New York and Tokyo.

Grant’s analysis is honest and insightful (as usual)…

The danger is that this will be another jolly club, where pals appoint pals, and the odor of self congratulation extinguishes the possibility of fresh thinking. Creatives may have the Canadian problem I was talking about this week: people who are brilliant as individuals and small groups working in agency circumstances find themselves diminished by still larger groups and the scale, to say nothing of the pretensions, of university life.

I guess the real challenge is how you get the academics and the creatives to play together This is not a famously productive relationship and it will take some tremendously good mediation to make these two parties mutually useful, let alone mutually inspirational.

If you ever need a little online design inspiration, check out the screens that Michael Angeles captures so lovingly…

A bit of fun for Monday morning: AMPs – Alternative Motivational Posters, office art for the other side of your brain.

Edward de Bono on the interaction between creativity and logic:

Or as James says, “That’s Common Sense You Didnâ€™t Have 6 Months Ago.“

“The really good idea is always traceable back quite a long way, often to a not very good idea which sparked off another idea that was only slightly better, which somebody else misunderstood in such a way that they then said something which was really rather interesting. ” — John Cleese

In all the bruhaha on business innovation and creative thinking, the focus is often on new ideas, and by extension how different the ideas are. I very rarely see an important dichotomy represented, that of developing ideas that work both inside and outside the organization. In companies, this translates into making money while also serving customers well.

Cheskin’s page on design and innovation touches on the dichotomy:

“Design can also be more effective than traditional consultation, again because consultation works from the inside out. Though they’re very good with internal processes, they don’t know how to connect with real customers through real products.”

In the realm of product design, I’ve written about this before in terms of balance in the user interface [ 1 – 2 ]. But how this gets done is still an unknown. Jeanne Lietdtke describes a sequential approach in Strategy as Design:

Strategic thinking accommodates both creative and analytical thinking sequentially in its use of iterative cycles of hypothesis generating and testing. Hypothesis generation asks the question what if…?, while hypothesis testing follows with the critical question if…, then…? and brings relevant data to bear on the analysis. Taken together, and repeated over time, this sequence allows us to generate ever improving hypotheses, without forfeiting the ability to explore new ideas.

But the ideas themselves must express both constraints: service to the customer and service to the company, all while being novel. I’ve worked with people highly skilled in generating balanced ideas and from what I’ve seen they don’t alternate between the two, they conceive of both simultaneously. Such people are directed by a moral compass and a pragmatic embrace of amoral economics, blended seamlessly. I’m reminded of F. Scott Fitzgerald, who said, “The test of a first-rate intelligence is the ability to hold two opposing ideas in mind at the same time.”